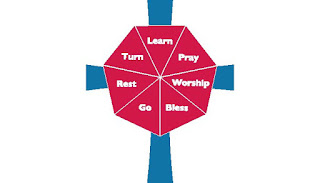 The 79th General Convention opened yesterday, July 5, with a festival Eucharist that included a rousing sermon by Presiding Bishop Michael Curry. He talked about the Way of Love and how Episcopalians can intentionally move forward in that way. He called for all GC participants to “meditate on the life and teaching of Jesus” before all of their work. He also called on all Episcopalians to do the same in their everyday lives. The Episcopal Church has created resources to help us do just that – The Way of Love: Practices forJesus-Centered Life. This new “rule of life” is to turn, learn, pray, worship, bless, go, and rest. You can read Bishop Curry’s sermon here.

BCP revision is proposed
Today the Committee to Receive the Report of Resolution A169 – considering resolutions to revise the Book of Common Prayer – voted to propose a plan of comprehensive revision. The committee’s resolution calls for the Standing Committee on Liturgy and Music to use “inclusive and expansive language and imagery for humanity and divinity” in its revisions. If passed, the resolution would initiate a revision process that would culminate in a new Book of Common Prayer in 2030.

Committee hearings on marriage equality resolutions
The committee looking at revisions to the Book of Common Prayer heard from supporters and opponents of two resolutions on marriage equality – A085 and B012. So many people attended and asked to speak that the hearing had to be moved to a larger room. Most of those addressing the committee spoke in support of Resolution B012. Resolution A085 would require all bishops to make provisions for all couples seeking to be married to have access to the marriage rites for same-sex and opposite-sex couples that were approved at the 2015 General Convention, and to add those rites to the Book of Common Prayer. Resolution B012 seeks to continue use of the trial rites, but without revision of the BCP. It also proposes that all dioceses be allowed to use the rites without requiring permission of the diocesan bishop. Instead, congregations that wish to use the rites but whose bishops have refused permission would receive Delegated Episcopal Pastoral Oversight (DEPO) from another bishop.

Calendar of Events at GC

Click here for a complete listing of events at General Convention.